Last Monday was another first for me thanks to my volunteering with PAS, so off to London I went by train early in the morning and all expenses paid!  I was going here - for a training session and introduction to PAS.  The items that we were to see are all found by individuals either out walking (possibly field walking) or metal detectorists and some are considered to be 'Treasure' reportable to the Coroner before they go back to the finder who can sell them to museums or individuals.  The British Museum do NOT value items but send them to an independent valuer

Our first speaker was the Curator of the Horological Collection who showed us examples of small clock finds in the ground.  They cannot clean them up because they would disintegrate but they do use X-rays, which tell them a lot.  Watches were first made in the 1500s, which I did not realise .

'Treasure' can be different things - precious metals like gold and silver, or large quantities of coins.


This is a 5,000 year old Bronze Age 'bulla' made of gold!  Double click on the photo to see the intricate construction made without the tools we use nowadays.  Mind blowing.

These were found in South Wales, date 875-800BC.  They could have been buried by a metal worker. 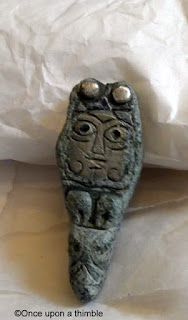 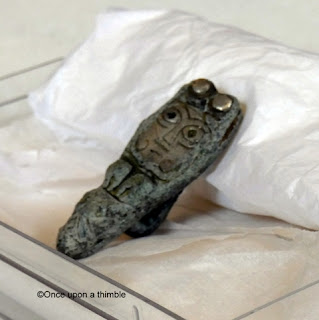 These two photos are a copper alloy strap end, with two silver rivets (hence they are treasure) and are from the 9th century.  I love this face and makes me smile. 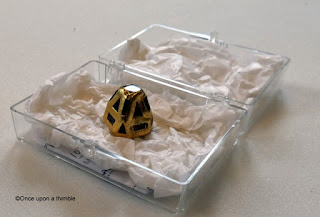 This beautiful item is gold with garnets set into it and is part of a sword pyramid. 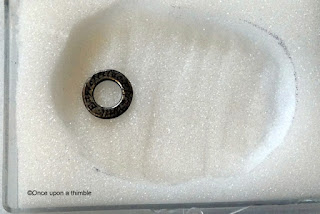 This item is a silver barbel for hawks made by Will Englefield in the 17th century.  It is tiny.

We were also shown a gold Roman finger ring that I photographed but cannot show because it hasn't been to the Coroner yet!!

Next stop was the museum's Coins and Medals Collection, but no photography here at all.  It was a numismatist's dream with racks of coin boxes and we were shown different Roman coins.  The UK has the best database in the world for coins as we record the best.  We were shown Roman gold coins found by a river bank in Kent that could have been buried by a soldier on his way to the North and never coming back for it, as well as coins from the Hoxne Hoard

After this we had a gallery tour of the BM and actually saw how the Hoxne Hoard was found.

So ended a brilliant day out, but before I left I had to visit this collection -

I have been to Sutton Hoo but never seen the helmet before.

So ended an informative training day, but not before I had booked myself onto a conference for PAS volunteers later in June, also at the BM!!

For anyone wanting to see crafty things, my apologies but during summer months these get pushed onto the back burner and also because this week I am looking after my younger son's dog so plenty of walks and exercise both for him and me.  Our local countryside at its best. 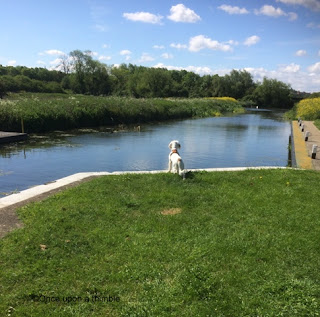 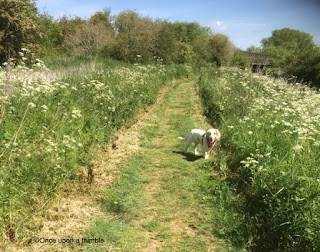 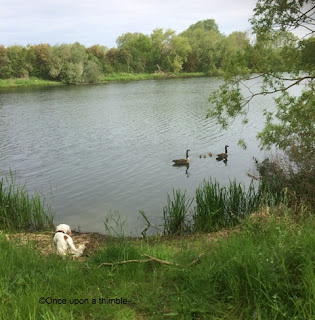 Last Sunday saw me on my way to Leicester with the 50+ Adventure Club for another outing on a lovely sunny day.  We were going to have a guided tour of the old parts of the city and though Leicester is close to me in mileage I know very little about it historically AND I always get lost when I have to drive through it and usually go a long way round to get out!

I knew that there had been a Roman settlement there and that was our first stop, to see the Roman walls 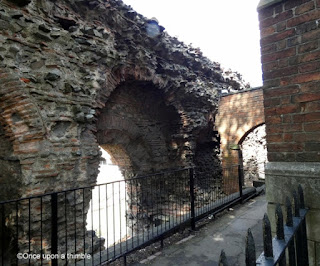 and remains of the baths 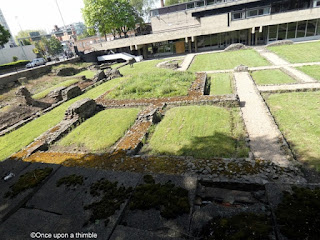 Then onto the castle area and the church of St Mary de Castro (St Mary of the Castle) whose origins show that it was built within the enclosure of the castle. 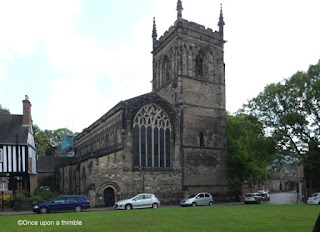 Richard 111 would probably have worshipped here before the Battle of Bosworth as he could have stayed in the castle and it is believed that Geoffrey Chaucer married his second wife here.
The 'Motte' of the castle is still there but overgrown with vegetation so not easy to photograph and our guide said that the Victorians had chopped the top off to make a bowling green - what vandals they were!! 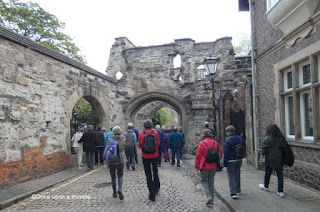 We exited the Castle Yard through one of the old town gates.

We were now into the slightly more modern part of the city and passed -
built by William Wigston in 1511, a wealthy wool merchant, to house two priests to say prayers and masses for the souls of the Royal family and his own family.  In about 1600 it became a grand domestic residence.
was originally one of the entrances to the religious precinct of Leicester but as I always find when I take a photo was under maintenance!! 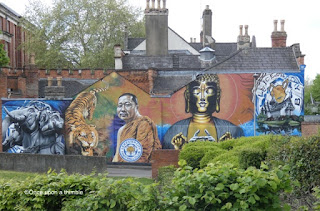 Something a little more modern, a mural which seems to promote Leicester City football club, who were actually going to be playing against Chelsea FC when we were there.

We were shown
which is a beautiful example of a late 15th century timber framed wool merchant's house.  It is now a restaurant with music blasting out of it!!

Next stop was the Guildhall 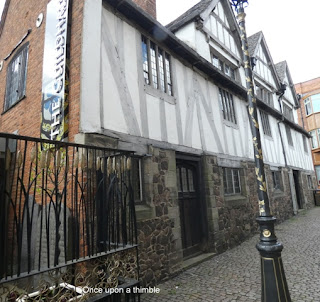 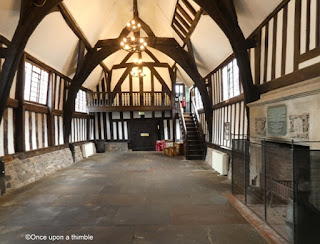 and we spent sometime looking round here 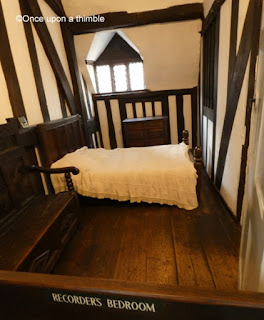 The Hall is still used for public meetings and concerts.

However the most exciting part was to come when we went into the Cathedral.  On the tour we had passed this car park 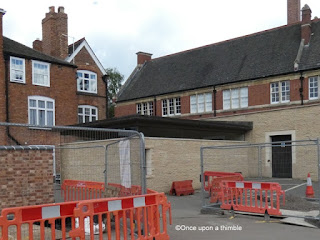 once again having work done to it - just my luck, because this is where the skeleton of King Richard 111 was found.  It is behind the stone wall that you can see in the corner. 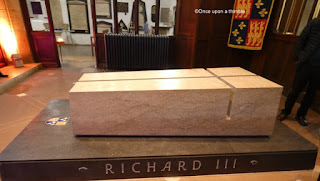 I have been wanting to visit this ever since it was discovered and I found it a very moving experience. The tomb is made of fossilised Swaledale stone quarried in North Yorkshire (he was the last member of the House of York).  His coat of arms and the boar are incised on the tomb. 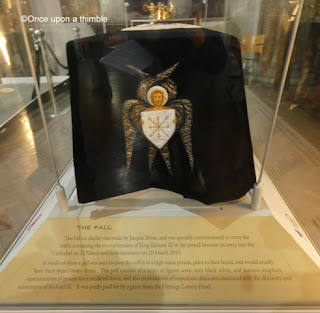 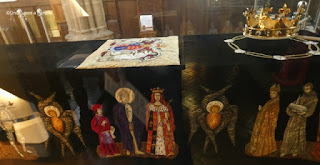 Quite magnificent and the embroiders amongst the group spent a long time trying to work out how it was made!! 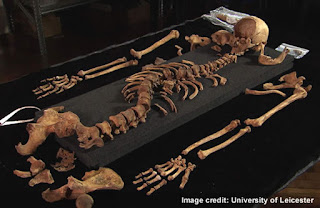 and if the digger had gone in a foot further either way he would never have been found!
Posted by Onceuponathimble at 15:07 4 comments:

Onceuponathimble
Patchwork, quilting and crochet are my passions. I am always looking for new techniques and will try out my own ideas and adapt patterns for myself. I hope you like my blog and if you do please let others know. I have a Facebook page for you to visit: https://www.facebook.com/IloveOnceUponAThimble